Dyngus Day at the Market 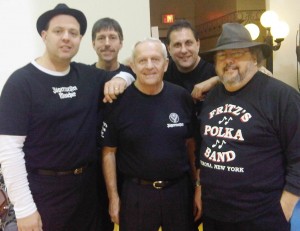 On Dyngus Day, the Broadway Market WILL BE OPEN and Celebrating!!!!

Watch for more events – presently scheduled from Noon to 3:00PM the Jagermeister-sponsored, Fritz’s Polka Band will be performing at the market.

The group was formed in 1978 by lead accordionist, the late Fred Scherz Sr., and his eight-year old son, Fritz, for whom the band was named. Sadly, Fred passed away on November 14, 2009, but Fritz is going to try to keep FPB going. FPB performs an eclectic mix of musical styles, including modern polka, country, fox-trot, waltz, and more! Fritz’s Polka Band is NOT an oompa pa band or the stereotypical “polka” band. In fact, FPB is known for breaking the stereotype regarding “polka” music. FPB is the first polka band to perform at a Woodstock Festival!

Fritz’s Polka Band has made 17 recordings, which have achieved international airplay. Individuals of the band, and the band itself, have received some prestigious honors. As a group, FPB has performed on stage with “Canada’s Polka King,” Walter Ostanek (Grammy winner), “America’s Polka King,” the late Frank Yankovic (Grammy winner), LynnMarie Rink (Grammy nominee), and Glen Burtnik. Individually, Fritz has performed on-stage with Steve Augeri (former lead singer of Journey). FPB even appears on “The Manchurian Candidate” DVD, from Paramount Pictures!