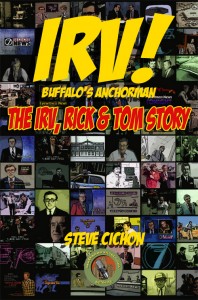 Steve Cichon – author of the book “Irv! Buffalo’s Anchorman: The Irv, Rick, and Tom Story” – will be signing copies at the Broadway Market on Saturday 10/15 from 11am-1pm as part of the Market’s Wine Fest.

The story of a TV anchorman so universally loved in Western New York that only one name is necessary… Irv. From the 1950s through the 1990s, Irv Weinstein informed and entertained generations of Buffalonians with his unmistakable style of writing and delivering the news.  Together with Rick Azar and Tom Jolls, Irv was a part of the longest running anchor team in history, and their story is the story of Buffalo over the last half century.

Cichon is an awarding-winning journalist and local history buff.

To find our more about the book and Steve Cichon, visit his website—>