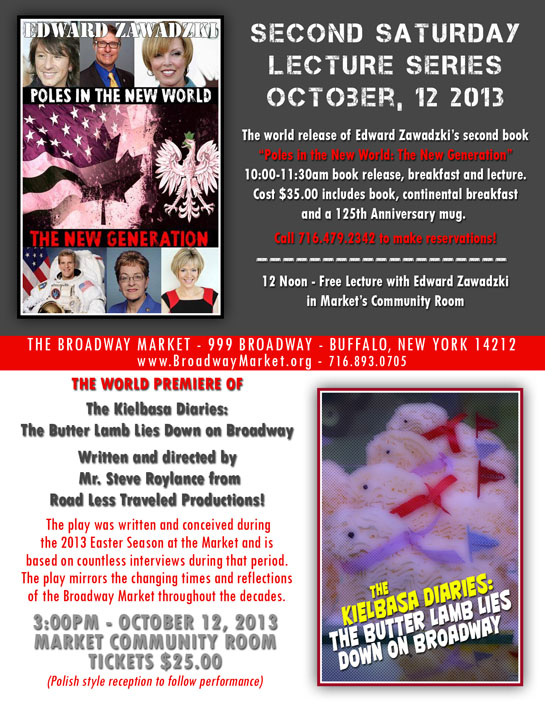 The world release of the book, “Poles in the New World: The New Generation” written by Eddy Zawadzki, will be held at 10:00am in the Broadway Market Community Room, where Mr. Zawadzki will be on hand to unveil his new book. Mr. Zawadzki is a well-known author in Polish communities in both Canada and the U.S., and he is no stranger to the Western New York area.

The ticketed event will occur from 10:00am – noon, where a book signing and lecture will occur. In addition, a continental breakfast and a 125th Anniversary mug of the Broadway Market will be provided. Pre-registration is required and the cost is $35.00. Checks should be made out to the B.E.S.T. Community Association. Space is limited

At noon a free lecture will occur, and books may be purchased directly from Mr. Zawadzki after the lecture.

At 2:30 pm, the cast of the world premiere play, “The Kielbasa Diaries: The Butter Lamb Lies Down on Broadway”, written and directed by Mr. Steve Roylance from Road Less Traveled Productions, will arrive to prepare for this historic performance. At 3:00 pm, the performance will begin in the Broadway Market Community Room.

The play was conceived and written during the Easter Season 2013 at the Broadway Market. Based on countless interviews during that period, the play mirrors the changing times and reflections of the Broadway Market throughout the decades. You may even find a part of yourself in the play. After the play, a Polish style reception will be held.

Pre-registration is required and the cost is $25.00. Checks should be made out to the B.E.S.T. Community Association. Space is limited.